2014 marks the beginning of CMCH chronicling monthly ‘Media Moments’. These posts will be about real-life experiences (the good, the bad and even the funny) involving media and child health. These stories are meant to help create a village square of commiserating and co-celebrating the many ways media intersect with the lives of children. Please comment and even submit your own ‘Moment’ to share with your fellow readers.

Enjoy your media and use them wisely,
The Mediatrician® 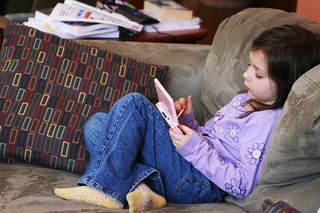 When I was 10 years old (circa the early 1990s), my older brother gave me a Nintendo Game Boy. Growing up with older brothers meant that we were always fighting over whose turn it was to play Mario on our console Nintendo, and I was often the one left out, so this Game Boy meant the world to me. I treasured the Game Boy for years, and I still own it to this day (and it still works!). I maintained my love of video games as I grew older, continuing to play everything from console games to computer games to mobile games.

This past summer, I was visiting with my 7 year old niece and 13 year old nephew, and it wasn’t long before we broke out the Playstation 3 and started playing Mortal Kombat. I soon realized that I had probably not made the best choice to play this game with my niece present—not only due to its violent content, but also due to its advanced level of gameplay. I watched as her frustration grew; she continually mashed buttons hoping to land a move, and her disappointment was evident as my nephew cheered every time he won. She clearly wasn’t having fun.

At that point, I removed my Nintendo 3DS (a modern day Game Boy) from my purse, and I watched her eyes light up as I flipped through the close to 30 games I had in my carrying case. After asking which game she should try, I gave her Cooking Mama, a cooking simulation game where the player practices virtual skills such as chopping vegetables, stirring soups, and creating recipes.

I wish I had selected this game first—it is full of bright colors, cartoon characters, upbeat music, and sound effects—much more appropriate for a 7-year-old than a fighting game. I watched as she giggled and smiled and showed me her accomplishments while she played. We spent the afternoon together, talking about the game, taking turns playing, and talking about cooking and life in general.

I went home that night and hunted through some boxes until I found the older version of my DS. I returned to see my niece the next day, and handed it over to her. The shocked look on her face when she realized that it was truly hers was priceless, and I was reminded of the similar gift my brother had given me years earlier, and how lucky I was to be able to share my love of gaming and technology with my niece.