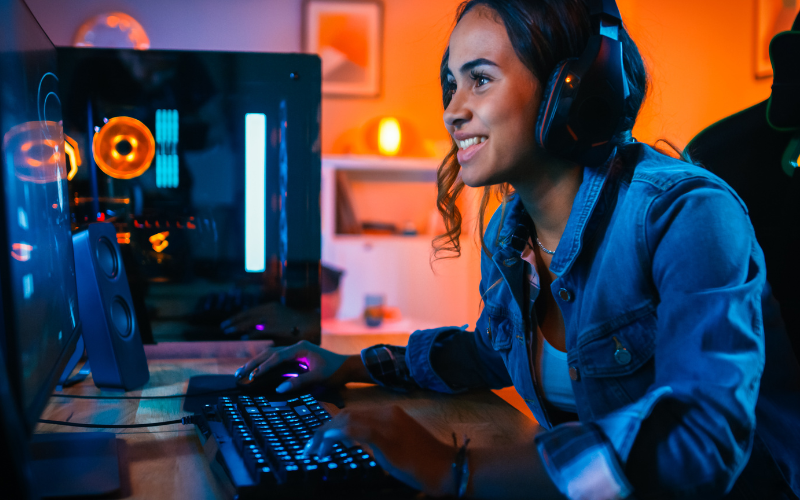 Sam Schwamm is a research intern with the Lab and provides support on multiple Lab projects, assisting in data collection, management, and analysis. His academic and professional interests center on the relationship between interactive media (especially video games) and positive youth development. Sam is a second-year Master’s student in the Eliot-Pearson Child Study and Human Development program at Tufts University.

Video games are extremely popular among children and teenagers, and their impact on young people’s development remains a hotly debated topic. Video games are now the second-most popular form of screen media used by young Americans, with players gaming for more than two hours per day on average. A recent industry survey found that people of all ages and backgrounds view gaming as a source of comfort, relaxation, and enjoyment, while the majority of parents agreed that video games help their children learn and build relationships.

Despite these reported benefits, research and public discourse on video games often focus on negative outcomes like overuse and aggression. While these concerns are understandable, it is important to offer a more nuanced view of how video game play impacts the lives of young people, especially when considering the ever-expanding variety of games and platforms available to them.

Thankfully, a growing body of research has demonstrated that video game play can improve mental abilities, social behavior, and overall well-being among children and adolescents. Because these benefits are often closely linked to particular types of content and/or styles of play, this research offers valuable insights for designers, parents, educators, and anyone else interested in promoting positive gaming experiences.

First and foremost, video games’ uniquely playful and interactive nature makes them a particularly promising tool for helping young people learn and grow. Psychologists have spent decades studying how children develop their cognitive, social, and emotional skills during play, and recent research suggests that these same benefits can apply to video games.

Active media use, such as video game play, has also been associated with more dramatic changes in individuals’ thoughts and behaviors compared to traditional forms of media like television. Playing fast-paced action games has been shown to improve mental abilities like attention and spatial awareness, and these effects may be even more substantial on the developing brains of young people. Video game play could also contribute to young people’s well-being: gaming has been linked to increased positive emotions and emotional stability, and one study found that more time spent playing video games was associated with fewer relationship problems and mental health issues even after accounting for other risk factors.

Contrary to popular belief, video games are an increasingly social activity that can help players build important interpersonal skills. The average gamer spends almost half of their time playing with others, whether in-person or online, and uses this time to meet new people and maintain existing relationships.

Research has shown that people who play prosocial games, which encourage cooperation and helping others, are more likely to express empathy, help each other, donate their time and money, and intervene on behalf of someone in a crisis; even violent games can have positive effects, like improving social connection, if they are played cooperatively. While players’ personalities may influence their choice of games, studies have found that playing these types of games directly improves young people’s social attitudes and behaviors for at least several months.

In recent years, there has also been a growing interest in using video games for educational purposes. Two examples are Mindcraft and Quandary:

Research on educational game play has found enhancements to core mental abilities like attention and problem-solving, as well as increased academic engagement and learning, among children and adolescents.

Research on the cognitive, social, and emotional benefits of video game play, combined with a growing interest in educational and prosocial gaming, paints a much more optimistic picture of how video games can impact the lives of young people. However, there is still plenty of work needed to ensure that all children and teenagers can experience these benefits in their own play.

Leaving Behind Positive vs. Negative to Focus on Wellness for All

For game designers, there is a clear opportunity to create more games that promote learning and social connection among players from different backgrounds. Researchers will also need to continue developing more nuanced models of how game content and the context of play influence the effects of gaming, particularly among understudied populations like older children and low-income students. Thankfully, the Digital Wellness Lab plans to tackle many of these questions in upcoming research about social gaming.

Finally, teachers, parents, and other adults can use video games as an opportunity to start conversations with young people around important topics like critical thinking, media literacy, and digital citizenship.

It is time to leave behind the dichotomy of video games as either positive or negative and focus instead on promoting wellness among young people in this new digital environment, or as one researcher eloquently stated: “Video games are not inherently good or bad, just as any tool is not inherently good or bad… [they] can have both positive and negative effects… and games are excellent teachers.”