Our latest Pulse Survey results are in! 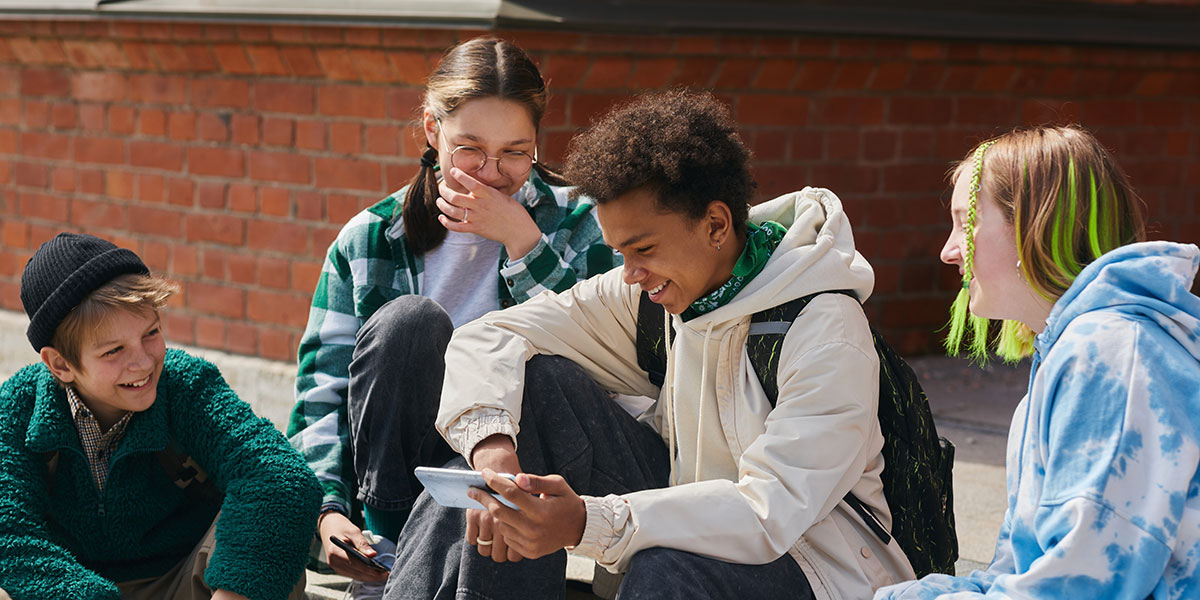 Our latest Pulse Survey results are in!

Do you ever wonder what your teenager is thinking as they scroll through their phone or sit glued to their laptop? Parents have a lot of opinions about their kids’ media use, but what are the kids’ opinions? In our most recent Pulse Survey (Adolescent Media Use: Attitudes, Effects, and Online Experiences), the Digital Wellness Lab surveyed 1,480 adolescents between the ages of 13 and 17 to learn more about how they perceive their individual media use and its effects on their health and well-being.

The survey asked teens a range of questions about their behaviors, how helpful or harmful they found certain media use, who they connect with online, how they connect, and what features help them feel most safe in digital spaces.

Youth are constantly plugged in

By this age, most adolescents have at least one device for their personal use, with 94% of those surveyed reporting that they own a smartphone. From checking their phone multiple times in an hour to using screen media late into the evening, adolescents are spending a lot of time on devices. However, they don’t see their use as excessive compared to their peers.

Do you have any of the following devices for your own personal use? 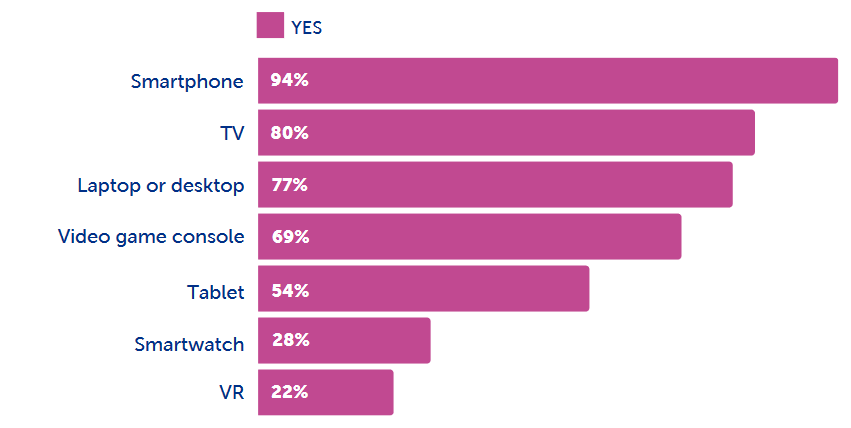 About how frequently do you check your phone (not counting when asleep or in school)? 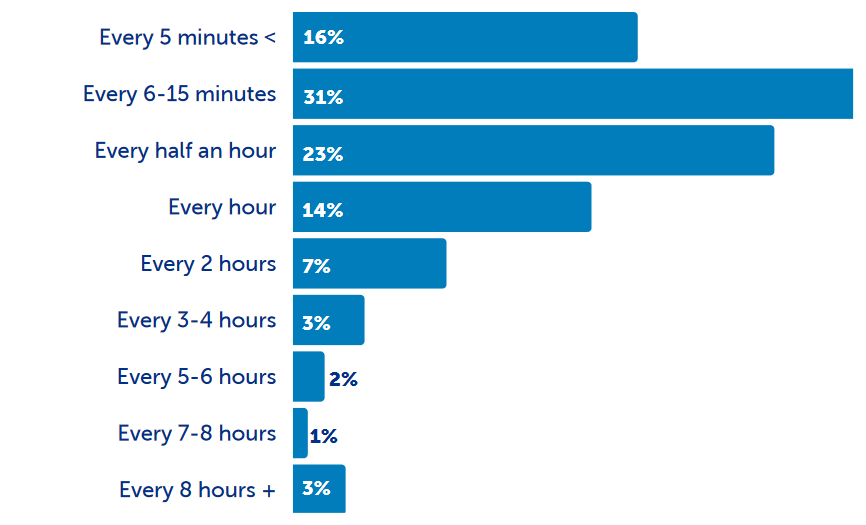 On a typical weekday, about what time do you stop using media for the night?

How do you think your screen media use compares to your peers?

Adolescents are using popular apps at least once a day

Among our sample, apps or sites delivering short format videos seem to be the most popular. The top four were YouTube, TikTok, Instagram, and Snapchat. Adolescents also reported that they often use direct messaging on social media to communicate with friends.

Do you use any of the following at least once a day? 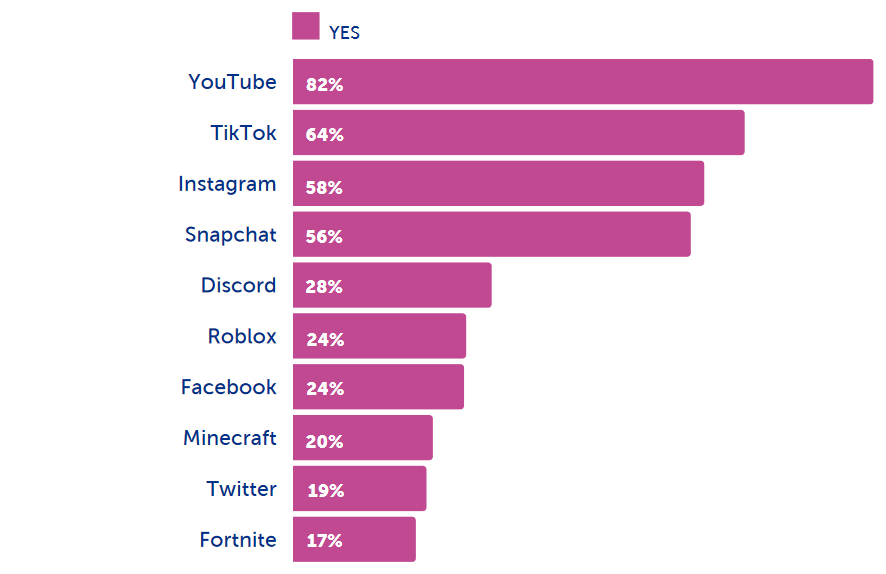 Do you chat, talk, or otherwise connect with friends in the following ways at least once a day?

Adolescents seem okay with the media rules they have

Many participants reported that their family has no rules about screen time. This number was higher for girls than boys. Of those participants with rules, more than half described them as “the right amount of restrictive.” These rules focus more on restricting content than limiting time. Many young people, especially girls, report using screen time tracking apps on their devices.

What rules does your family have about screen media use? (check all that apply)

What rules does your family have about screen media use? (check all that apply)(gender split) 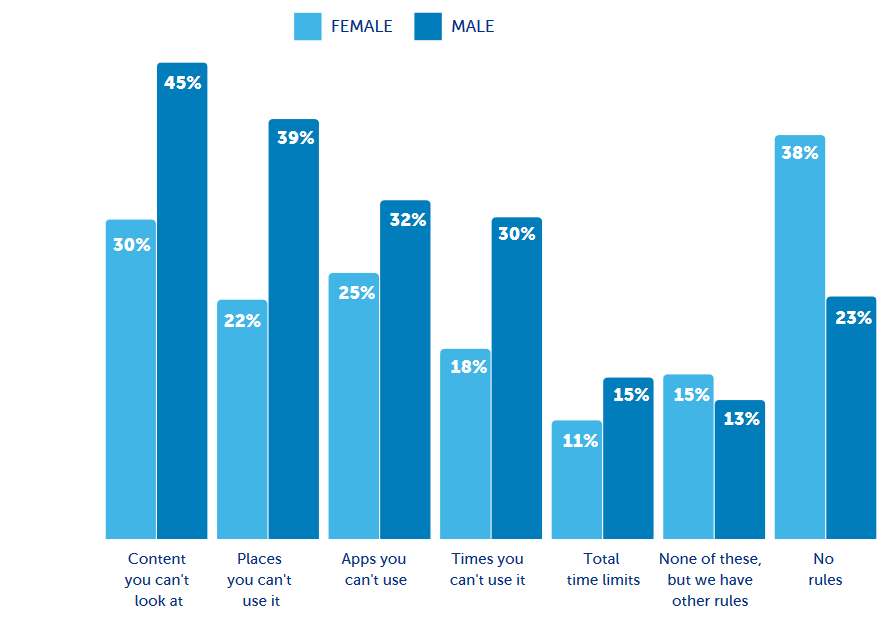 How do you feel about your family’s rules about media use?

Do you use an app or tool on your phone or tablet that tracks how long you use it? 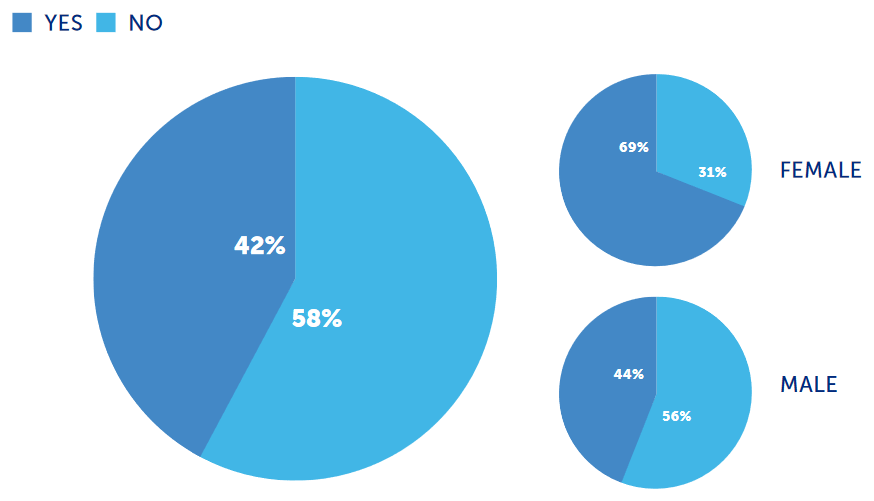 Youth see their media use as a positive way to connect

The adolescents in our sample described media use that promoted social connection as some of the most helpful to their overall well-being. Many said that social media in particular made them feel socially connected and emotionally supported by peers at least sometimes, and half reported that social media made their friendships better.

To what extent do you find the following uses of screen media helpful or harmful to your overall well-being (feeling happy, healthy, and safe)?

How often does social media make you feel any of the following ways?

Adolescents acknowledged that social media interferes with sleep, time with family, and schoolwork. While around half of participants reported that social media rarely or never made them feel isolated, sad or depressed, or like their life is worse than other people’s, they did report that it made some things worse – particularly grades in school and body image.

In your opinion, has your screen media use encouraged or interfered with the following?

Do you think social media makes each of the following better or worse?

Most respondents reported that they only or mostly communicate online with people they know in person. For those who communicated with people they did not know offline, most considered at least one or two of them to be friends. The adolescents seemed more cautious when it came to some aspects of interacting with strangers online, reporting that they probably or definitely would not share photos of themselves, trade in-game currencies, or talk in real-time in a video game with someone they just met online. Trusting someone online comes from having a mutual connection (but a blue checkmark to indicate account verification also helps).

Which of the following best describes who you communicate with online?

Of the people you talk to online but have never met in person, how many of these people do you think of as friends?

Would you do each of the following with someone you just met online?

What makes you trust what someone is saying online? (check all that apply)

Adolescents reported valuing a lot of different safety features on social media or gaming platforms. The most important features that help them feel safe and secure are being able to block users and report posts/users.

How important are each of the following in making you feel safe and secure using a social media or gaming platform?

What does this all mean?

The findings from this Pulse Survey reaffirm that adolescents spend a lot of time using media, but challenge the assumption that all of that use is bad. While there are some important negative effects (e.g., body image, grades), the social aspects of media use (e.g., connection, support) are perceived by youth as largely positive. Social media provides a tool for them to connect with people they know and people they don’t, but there is caution around what they’re sharing with strangers, and they value the ability to block people when needed. Our findings also reveal adolescents to be more self-aware than we often give them credit for, and they are not averse to rules about their media use.

Many of the results of this survey counter the widely-held belief that young people are reckless in their consumption and creation of media. We hope parents and caregivers can use these insights as a jumping off point to engage with their children about their individual media use. One way to do this is to create a shared media use agreement with your family. Working together, we can promote healthier, safer, and more meaningful interactive media use for young people.