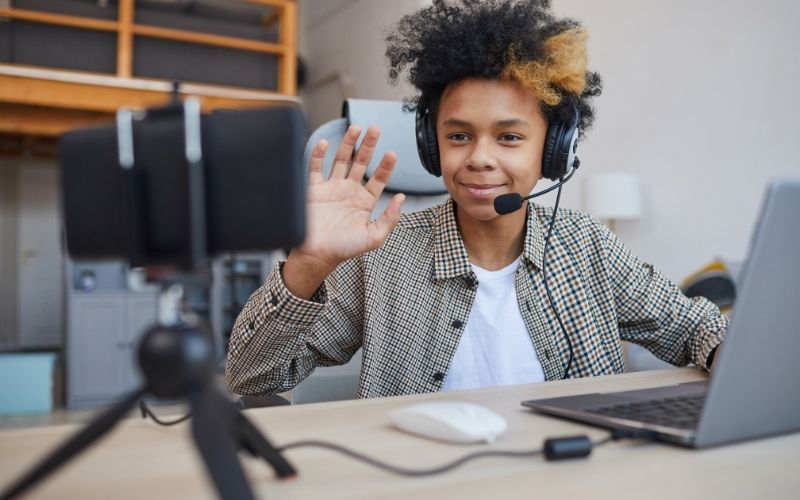 What is video game livestreaming?

Video game livestreaming is when gamers broadcast their gameplay to a public audience using online services. Many children and teens watch gamers livestream as a form of entertainment; in 2020, there were 18.6 billion hours of video gameplay watched on Twitch, where 41% of registered users are aged 16-24.

Platforms for video game livestreaming that are popular among teens include:

Twitch is a livestreaming platform where users can watch livestreams or recorded videos of gameplay. Viewers can message others via a public chat or private message. Twitch requires users to be 13 years or older, and recommends that youth between the ages of 13 and 18 years use the platform under parental supervision.
YouTube allows users to livestream from their channel, and many young people use YouTube to watch video game streaming. YouTube does not allow those under the age of 13 to livestream unless they are visibly accompanied by an adult.
Facebook offers a dedicated game streaming hub nested within Facebook. In order to have a Facebook account, users must be over the age of 13.
Discord offers text, voice, and video chat features, along with some livestreaming options for small groups. Discord requires users to be age 13 and over. While Discord is not designed to be a livestreaming service, it is often used by livestreamers as a way to interact with their viewers in an online community setting.

It is important to note that, although the above platforms require their users to be 13+ in order to create an account, all of them allow viewers of any age to watch certain gaming streams without logging into the service.

Why do kids want to stream their video game play?

Although scientific data is lacking when it comes to exactly why many children want to stream their video game play, here are several possibilities:

They watch others stream and want to be like other streamers.
They want to create and/ or be part of a community of others who share their interest and love of gaming.
They enjoy sharing their skills and knowledge with others.
Becoming an esports star or professional streamer has become an increasingly popular career choice for youth today. Similarly to pro-athletes, very few gamers reach a level where they can earn money through endorsement deals and esport competitions.

Why do kids want to watch streamed video game play?

Children and teens want to watch others play video games for a variety of reasons, including:

They are able to learn new skills, tips, moves, and other information from watching others’ gameplay. Viewers are also able to follow their favorite gaming or esports tournaments and stay-up-to-date with the latest gaming news.
They can interact with others, and in some cases strengthen their relationships with friends and family members who are also watching or livestreaming themselves. Livestreams can also provide a sense of community as viewers feel as though they are part of a gaming experience. In addition, they might watch because of the attractiveness or popularity of specific streamers or the interest in particular games or genres.
They enjoy the experience of watching others livestream in a way that is similar to watching live streams on social media.
Some watch streamed video game play to (temporarily) distract them from the realities of their everyday life or a particularly negative aspect of their life.

What are the risks of video game streaming/watching?

Children and teens watching livestreamers may be exposed to inappropriate content such as bad language, sexualized content, or violence. Many livestream platforms offer direct or private messaging, enabling other viewers to contact children directly.
There are privacy concerns when it comes to streaming video game play, especially as children and teens often stream from their bedrooms, which may reveal intimate details about their lives, such as where they live and go to school.
Children can experience cyberbullying or become a bully themselves. Viewers may also engage in swatting on a livestreamer, which is a type of online harassment that involves an individual calling 911 to falsely report an emergency or crime at a livestreamer’s address.
Children and teens’ mental health can be negatively affected if their livestreaming or livestream watching becomes problematic, including interfering with the time they’d normally spend outdoors, with friends, having a screen-free meal with their family, and/or sleeping.

What are the benefits of video game streaming/watching?

Children and teens can connect with their friends and other gamers with a shared interest in gaming through livestreaming and/or watching others stream their play.
Children and teens can learn more about gaming and become better players by watching others stream their gameplay and sharing strategies.
For a selected few professional teen gamers, it is possible to earn money for streaming their play.

How can I support my child streaming/watching in healthy ways?

Before allowing your child or teen to stream their video game play or watch others stream their gameplay, ask them about the following:

What games do they want to watch or stream?

What platform(s) do they want to use to watch or stream their gameplay?

Where/when/how will they livestream their gaming and/or watch others livestream?